On the Gods of the Motherlands - Part Two 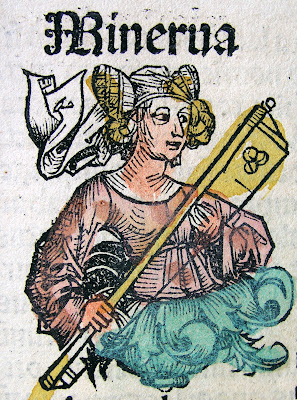 Continuing the Gods of the Motherlands with Hercules through Minerva.

Also - For those that purchased an electronic copy of NOD #4, I have attached the missing cover. You should be able to download it again with the cover - if not, let me know and I'll send it to you as a PDF.

Hercules is strength personified. While still an infant, he strangled two huge snakes with his bare hands. Hercules is a fearless adventurer whose many escapades are the stuff of legend. A robust, cheerful man, he has an appetite for food and women that almost equals that of his father.

Hercules appears as a stout man with a long beard, usually wearing a lion’s skin or leather armor, brandishing a large, wooden club. Hercules is the son of Jove by the mortal woman Alcmene. Being born by Jove from an extra-marital tryst has earned Hercules the enmity of Juno, protector of marriage and sister-wife of Jove.

Hercules is best known for his Twelve Labors, quests he had to complete to atone for killing his own children when he was driven insane by vengeful Juno. The labors included killing a giant lion, hydra, giant deer, giant boar, cleaning stables, killing the Stymphalian birds (giant cranes with metal beaks), capturing a giant bull, rounding up carnivorous horses, stealing the girdle of Hippolyte, queen of the amazons, herding the cattle of Geryon, fetching the Apples of Hesperides and capturing Cerberus, guard dog of Hades. Because many of these labors included slaying giant beasts, Hercules is often taken as a patron by rangers.

Grande Tourney (July 22 - August 7): During the Hercules' tournament, people compete at various athletic and musical contests. Brass tripods are awarded to the victors.

Jove
God, Jupiter, Zeus
Lawful god of the upper sky and royalty
Wields a lightning bolt
Patron deity of Nomo
Served by angels and air elementals
Symbolized by a lightning bolt
Clerics can cast the magic-user spell Lightning Bolt as a 5th level spell, dealing damage as though 2 levels lower.

Jove is the king of the gods, though his command over them is far from absolute and his decisions are often challenged. Jove is the god of the sky, the ruler of all high things, including the clouds, rain, wind, thunder, and mountain summits. He is the protector of laws, friend of the weak, and dispenser of justice. Jove is also worshiped as Father Oak, or the Green Man, the masculine force of procreation.

Although Jove can take any form he wishes, he often assumes the form of a powerful, bearded man with regal bearing when he visits the mortal world. His true form is that of a ball of fiery light so intense that no mortal can look upon him without bursting into flames.

Jove is the husband of Juno, queen of the gods. He is the father of Minerva, Apollo Helios and Hercules. His brothers are Neptunus, ruler of the oceans, and Plutus, ruler of the Underworld. Jove’s father was Saturn, king of the titans.

Gulestide (December 22-28): Gulestide is not only a time of feasting and merriment, but also a time when the world is turned upside down; masters and slaves, teachers and students and nobles and peasants switch places for a time, with the proceedings led by an elected Lord of Misrule.

Juno Regina
Hera, Saturnia
Lawful goddess of women, marriage and cattle
Wields a spear
Served by angels and erinyes
Symbolized by the cow, peacock or pomegranate
Clerics of Juno can, at 5th level, summon an erinyes once per month to punish an oath breaker

Juno is the goddess who protects women and the sanctity of marriage. She is known for her vengeful nature, especially toward the paramours of her husband Jove. She is the queen of the gods, often depicted enthroned and wearing a diadem and veil. Poets usually describe her as cow-eyed, indicating large, beautiful eyes.

Juno is the wife and elder sister of Jove and the daughter of Rhea and Saturnus. Her children by Jove are Mars, Juventas, Discordia and Ilithyia, goddess of childbirth. She reputedly created Vulcan without the aid of her husband in response to his creation of Minerva.

Matronalia (June 1): On this day, women perform rites in the temple of Juno. They are permitted to wear their hair down and not permitted to wear belts or any knots in their clothing. Husbands are expected to say prayer for their wives and children give presents to their mothers.

Mars
Ares, Camulus
Chaotic god of war
Wields a spear
Patron deity of Azsor
Served by demons
Symbolized by a spear and shield
Clerics of Mars are permitted the use of swords, though they must be cleaned of blood after use and anointed with expensive oils (worth 10 gp with each use)

Mars is the god of blood lust and slaughter. He is fond of strife, anger, and unrestrained blood-letting. As such, he is not a very popular god and is only worshiped by a large numbers of people in the city-states of Guelph and Nomo. Vultures and dogs are sacred to him.

Mars usually appears as a large man with burning, hateful eyes and a permanent scowl etched across his mouth. He wears ornate platemail armor and carries a flaming sword.

Mars is the son of Jove and Juno, the husband of Bellona and the lover of Venus. He is attended by Deimos (terror) and Phobos (fear) in battle, his sons by Venus, and by Adrestia, his daughter by his sister Discordia. Other members of his retinue are Nike, the deathless spirit of victory, Kydoimos, the demon of the din of battle, the Makhai (battles), the Hysminai (man-slaughters) and Alala, personification of the war cry. Mars’ other children by Venus are Cupid and Harmonia.

Armilustrium (November 12): On this day weapons of the army are purified and stored for the winter. The army is assembled and reviewed and garlanded with flowers. Trumpets blare and citizens gathered with their arms and armor take part in a procession with torches and sacrificial animals. Young noblemen dressed as ancient warriors with red capes take part in ritual dances.

Mercurius is the god of travelers, merchants, thieves, gamblers, athletes and eloquent speech. He also serves the gods as a messenger and an arbitrator of disputes. As a god of travelers and a slayer of giants (Argos, in particular), some rangers choose to worship Mercurius as their patron.

Mercurius is the son of Jove and Maia, a daughter of Atlas. His children include Faunus, the god of satyrs, Hermaphroditus, a man merged with the nymph Salmacis, Fortuna, goddess of fortune, and Autolycus, prince of thieves and grandfather of Ulysses.

Shrovetide (April 1): Merchants sprinkle their heads, ships, wagons and merchandise with holy water. Shrovetide is a day of raucous celebrations with a carnival atmosphere.

Minerva is Jove’s favorite daughter and the virgin goddess of strategy, architecture, sculpture, spinning, weaving, horses, ox olives, prudence, and wise counsel. Though she is a warrior goddess, she is no less skilled in the arts of peace, inventing the potter’s wheel, teaching men to tame horses and helping them to build great ships. Minerva is also a patron of chivalry and knighthood.

Minerva is depicted as a statuesque woman of great beauty attended by an owl. She wears the Aegis, a breastplate of goatskin with serpent fringes, a shield that bears a gorgon face, and a helm decorated with a winged lion.

Minerva was created by Jove without a mother, and as a virgin has no offspring of her own. She is often accompanied by Nike, the goddess of victory. She has aided many heroes, including Ulysses, Jason and Hercules.

Candlemas (February 1): The highlight of the day are candle-lit processions and rites of purification. It is especially an artisan’s holiday. Women consult fortune tellers on this day, plays are exhibited, and contests for orators and poets are held.
Posted by John Matthew Stater at 11:05 PM