To celebrate commissioning some awesome monster drawings from Michael Stewart and finally finishing statting all the monsters in the game, I present this preview of a few of the beasts ...

These giant armadillos are the size of oxen, and are used in much the same way by the natives of Fortuna’s Wheel. In the wild, they dig massive burrows and feed on giant insects and other small creatures.

Moggies are giant versions of the normal cat. They are the size of mastiffs and retain their specie’s love of stalking and playing with their prey. 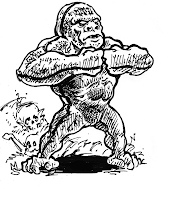 Gongthrottles are castings of gorillas in black bronze, with seams at their neck, arm and leg joints. They are hollow, and animated by wrath. A gongthrottle can pound its chest, sending out reverberations like those of a bell being struck. Creatues within 30 feet suffer 1d6 damage from the sonic waves and must pass a saving throw or be deafened for 24 hours. Gongthrottles who successfully attack with both fists grab their opponent and throttle them each round for an automatic 2d6 points of damage.

Hamazaks are amazons with scarlet skin and blue-black hair that they wax into bizarre shapes reminiscent of horns or complex antlers. They are tall and athletic, and excellent warriors. Hamazak warriors wear light armor in the form of hides and furs and wield two-handed swords and axes as well as heavy crossbows that fire bundled nets. Treat attacks from these weapons as ranged grapple attacks. Hamazaks are slavers and plunderers. Bands of hamazaks are accompanied by 2d6 slaves (random folk, usually commoners). 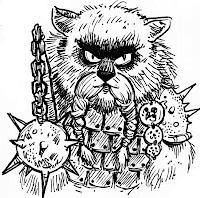 Qwards are a nomadic people who ride giant beetles across the grasslands, alternately trading and raiding with the people they meet. They live in groups called clowders that are ruled by their females, or mollies. Mollies have shorter, grayer fur than the males and can afflict people with an eyebite (saving throw or suffer -1d4 penalty to all d20 rolls for the rest of the day). Qwards sometimes serve powerful adventurers as bodyguards. Mollies wear necklaces of tiny skulls. 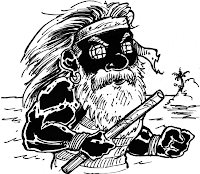 Zwunkers are black-skinned dwarves with long manes of gold hair. Their eyes are faceted and resemble yellow diamonds. Zwunkers live in caves overlooking the sea. They are skilled sailors and love nothing more than to feel the wind whipping through their manes. Once per day, a zwunker can control the winds, either calming them or whipping them into a frenzy. Zwunkers are highly resistant to magic, and their presence actually absorbs magical energy. Essentially, a zwunker’s magic resistance applies to all magical effects within 30 feet of of the zwunker. Zwunkers wear elaborate leather armor and carry steel rods for weapons. 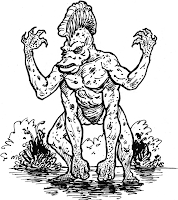 Kruks are a tall race of white-skinned humanoids with four arms, duck-like bills and tall, bony crests which allow them to communicate over long distances with rumbling roars. They dwell in subterranean caverns they have carved into perfect squares, with each cavern connected to others via underground canals filled with oily water. Kruks trade humanoid flesh and slaves in markets well attended by other creatures of the underworld. 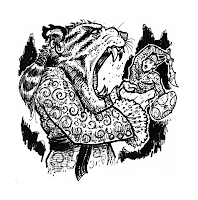 Rhuups are portly, furred ogres with a tigerish cast. They adore jewelry and fine clothes, and are remarkably intelligent (i.e. can answer questions about obscure lore with a successful saving throw). Rhuups have large, cavernous maws with frightful teeth, and their jaws are hinged in such a way that they can swallow people whole. Any bite that kills an opponent can also be assumed to result in the person being swallowed. This heals the Rhuup of 2d6 points of damage, and allows them to absorb the knowledge of the person swallowed.

Fiends are the foot soldiers of the demonic dimensions. They have a highly variable appearance, often taking forms so bizarre and unnerving that the mind reels. Each fiend has one of the following aspects (roll 1d4).