A week ago I announced that I was going to commission a piece of monster art from Russ Nicholson. The question, of course, was which monster. I introduced these five candidates ...

1. Fiend: A scaly demon carrying a barbed spear and sticking out a long, wavy tongue.

2. Meagle: Stunted piskie, looks like a cross between a hedgehog and gnome with bat wings; carry nets woven from human hair.

And in the best democratic tradition put it up to a vote. It was a hard-fought contests, with two candidates, Eight-Headed Creeper and Meagle, leaping ahead in the polls and Bounder playing the role of third party spoiler. Well, the votes from comments and e-mails are in and tallied and the contest went to Eight-Headed Creeper. And to be honest, I'm kinda happy about that. The Creeper and me, we have a little history.

It had to be six or seven years ago. I was sitting in front of the computer, tapping away at the keys working on something RPG related, when my daughter scurried in to see what dad was up to. She had to be four or five at the time. I think at the time I was probably fooling around with converting lots of old monsters to a Castles and Crusades format (my system at the time), because she announced that she wanted to make up a monster. I suggested she start out with a drawing and she went to it, producing this little gem. 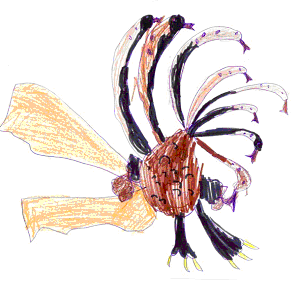 "Well, what is this monster called?", I asked, and she thought about it for a minute and came back with "Eight Headed Creeper".

"It sneaks around and steals gold from people"

"It is scary, but it usually runs away from fights."

So, I kept asking questions, and did my best to translate her Creeper into a monster, which is now going to show up in my own little RPG and is going to be illustrated by my favorite monster artist. Neat how things work out, isn't it?

Oh, and my daughter thanks those who voted for her Creeper. If PARS FORTUNA sells well enough, the Meagle is next on my list for a monster commission.

Today I'm putting a little more work into Western Venatia, but I'm mostly working on the PARS FORTUNA dungeon I'm going to play test next weekend with friends. I'm about 50 magic items away from finishing the PAR-FOR rules, and I also just realized that I need to make a PAR-FOR character sheet. The Mystery Men! project has achieved funding (!!!) and I'll post an update about that tomorrow.
Posted by John Matthew Stater at 12:00 PM