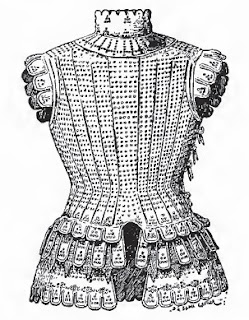 For PARS FORTUNATM, I wanted to do something slightly different with magic items. To that end, I kept the concept of potions and scrolls (in a slightly tweaked format), but I decided to make all other magic items unique. I've used the treasure system in Swords and Wizardry quite a bit in producing my NODTM sandboxes, and so I knew that magic items in Swords and Wizardry are, by the rules, rare enough that unique magic items should work. After all, if the magic items in PARS FORTUNATM were not unique, it would have been pretty tricky to randomize them. Here, then, is the master magic item table, and the items in the Armor category.

Armor
Most magical armor carries an enchantment of +1 to +3. This bonus applies to the wearer’s AC, thus +1 light armor would give one a +3 bonus to AC rather than the usual +2 bonus. Magical armor resizes itself to fit its owner perfectly.

Armor of Orth: Orth was a kyssai scoundrel who have his life protecting a village from raiders. His armor was blessed by his heroism, and has long been lost by the champion of that forgotten village. Orth’s armor is a suit of leather armor (+1 light armor), the breastplate being stamped with a cornucopia. When the right fist is held aloft, the armor glows with light as bright as a torch. When the left fist is held aloft, the wearer and his comrades are immune to mind effects.

Champion’s Cuirass: Forged by the ilel and then lost during one of their many wars, this blue-steel cuirass is +1 medium armor and creates a 10-ft radius zone of magic resistance (10%) around the wearer.

Crusader’s Breastplate: This breastplate is washed in gold and has crimson leather straps. It counts as +2 medium armor and allows the wearer to control flames, making them brighter, snuffing them out, or causing them to leap at targets (treat as missile attack, 1d6 damage). The wearer gains a +2 bonus to save vs. fire.

Emperor’s Armor: This suit of plate armor is made of silvered steel, and the breastplate is marked with a noble crest of a hhai rampant. Owned by an ancient emperor of Vex, it was lost during the coup of the ilel, and it is prophesied that the person who will overthrow the ilel will come wearing this armor. Volzaar’s armor allows the wearer to fly (movement of 12), and the owner of the armor does not age. In daylight, it can be commanded to dazzle all in sight (saving throw allowed to negate the effect) once per day.

Gauntlets of Kriusaichon: These black boiled leather gauntlets allow the wearer to make a level drain attack with their touch. Treat this as a normal melee attack. Each time a level (or Hit Dice) is drained, the wearer permanently loses 1 point of charisma, their appearance becoming more ghoulish and unwholesome.

Hoden’s Mail: The famed olvugai adventurer Hoden wore this expansive coat of mail. The mail acts as +2 heavy armor and, on the wearer’s command, casts the spell Invulnerability.

Hospitaler’s Helm: This conical steel helm gives its wearer the ability to heal 2d6 points of damage with a touch once per day. The wearer, unfortunately, is struck with deafness while wearing the helm.

Mail of Ymbrym: Ymbrym was an olvugai smith of the highest order and arrogance. The coat of mail that reaches to the ankles and shines with an inner fire. It is +1 heavy armor and grants the wearer immunity to magical ranged attacks of level 1 to 3 (i.e. cantraps). Unfortunately, the wearer becomes an overbearing know-it-all while in the mail.

Ruby Scales: This +3 medium armor is composed of crimson-tinged scales of metal on a leather backing. On the chest, the armor is bejeweled with three perfect rubies that blaze with an inner fire. These rubies enable the wearer of the armor to cast three Maledictions. As Malediction is cast, a ruby loses its sheen. When all three have been cast, the armor disappears.

Scales of Faduz: Forged by the infamous osk smith Faduz, this +2 medium armor of lacquered black metal with gilded edges allows the owner to shape shift into the form of a beast. The chosen form cannot have more Hit Dice than the wearer of the armor. It has the side effect of making the wearer look more bestial.

Sollerets of ESP: Sollerets are, basically, armored shoes. This pair is made of steel and has long, pointed toes. The wearer of the sollerets gains the ability to read people’s minds, but each time this power is invoked, they develop a painful, ugly boil on their face. These boils effectively lower the wearer’s charisma by 2, and last for 1d6 days.

Zena’s Robe of Spells: Zena was a magician of olden times, claimed by all the magical races as one of their own. Her robe is made of thick leather, and acts as +3 light armor. Once per day, the wearer can cast any spell of a level equal to or lower than their Hit Dice.
Posted by John Matthew Stater at 9:02 PM