Last night, the child and I started looking at potential covers for Blood and Treasure. I've been chipping away at it in between writing the Hell hex crawl, finishing HCC 6 and putting the finishing touches on Space Princess, and I've so far finished about 90% of the chapter on characters* (still need to work on strongholds, domains and mass combat), have the basic adventure rules finished (skill checks, combat, dangers, movement/time, etc.) and have spells and monsters from A-C written up. So far, so good.

First image I looked at is one people have seen in my adverts on the back of issues of NOD. I originally found it at Golden Age Comic Book Stories. I like the overall look and feel - descending into the unknown - and it remains a strong contender. 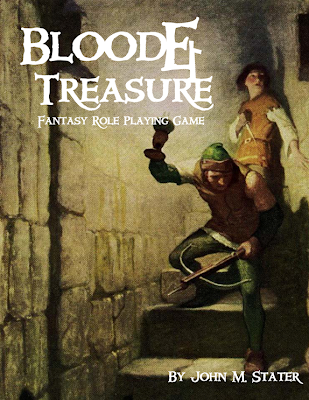 Looking at some other images from GACBS, I found this one which fits the "treasure" theme nicely, but frankly makes the game look like it's about pirates. 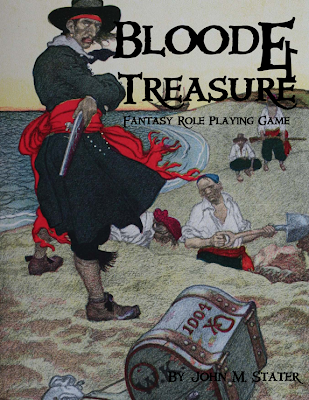 Side Note: I have to write a game about pirates now, because this illustration would rock as a book cover. I'll put it in the queue after Action X.


J.C. Leyendecker is one of my favorite illustrators. This illustration of Cuchulain is gorgeous. Very heroic - but is heroic the vibe I want for Blood and Treasure? The interior character art I've commissioned is meant to look like adventurers who are banged up, dirty and scarred. Nice, but I'm not sure it's quite right. 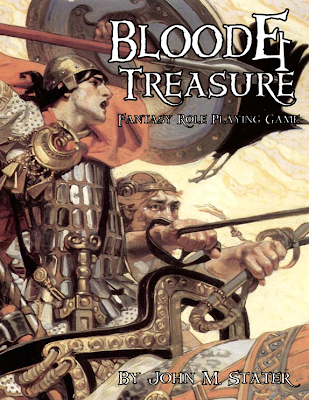 The last image was initially just for fun - I didn't expect I would like it. It is a medieval painting of a cleric being beaten up by demons. No - not the one I just used for NOD 11, but probably depicting the same scene. After I dropped it in, though, I did like it, very much. Even looks like there is a goblin and gnoll in the background. 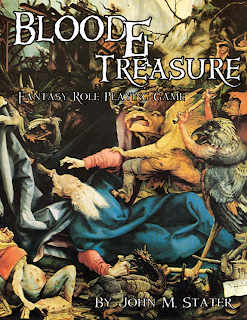 In the final analysis, for me, it's between the first cover and the last. Unless I find something else, of course. What are your thoughts, gentle reader?

* Races are going to be the traditional human, dwarf, elf, gnome, halfling, half-elf and half-orc. Classes are going to be all the classes in the SRD (barbarian, bard, cleric, druid, fighter, magic-user, monk, paladin, ranger, sorcerer and thief) plus two of the prestige classes turned into full classes, the assassin and duelist. I think that covers things pretty well.
Posted by John Matthew Stater at 8:58 AM