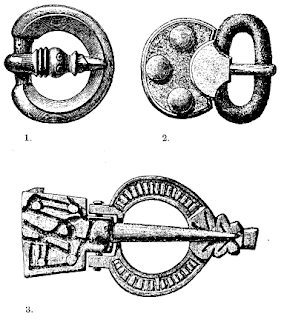 Another glimpse at the Underworld ...

24.94 Old Buckle: The ground here is quite uneven, with deep (1d4 x 100 feet) canyons and narrow ridges. On the edge of one such ridge an adventurer might spot a buckle and the remains of a leather belt hung on a small spike of stone attached to the ridge. An adventurer tried to use the belt as a rope to swing themselves down to a ledge located about 6 feet below the edge of the ridge. On this ledge there is a small idol of Lilith made of gold with inlaid ruby lips and amethyst eyes (worth 500 gp, weighs 100 lb). Touching the idol causes one to lose their balance. Kissing the idol teleports them into the stronghold of Lilith in Erebus, the second circle of Hell.

39.107 Quarry Men: A tribe of 200 rock men have an extensive quarry here, pulling granite from the walls of the cavern and selling it throughout the Glooms. Despite their stodgy and staid ways and dull way of speaking, the rock men are quite intelligent and excellent bargainers. The rock men dwell in small caves dug into the sides of their ever-expanding quarry. The best granite is retained and carved into new rock men. The rock men have a treasure of 2,130 sp, 380 ep, 2,520 gp, a brass icon of Vulcanus (worth 30 gp), two fine rhodochrosites worth 500 gp each and 20 barrels of mineral spirits (worth 6 gp each).

51.109 Notac-ichat: A clan of 40 notac-ichat and their 30 females and 35 young dwell here in a citadel of gray bricks, tiny windows and flat, crenelated roofs. The notac-ichat own a tapestry in which is impressed not only the image, but the intelligence of the archmage Vaunus the Vain. The tapestry advises their chief, Yar-Iskr, a rambling old male with purple chitin and a wandering mind. In truth, the archmage controls him and rules his people, using them to collect rare ingredients for a spell to make a simulacrum body that his mind can inhabit until something more permanent comes along. They currently lack an ounce of halfling blood and the wisdom teeth of a dwarf.

Image from Wikipedia
Posted by John Matthew Stater at 10:34 PM