Last night, the kid and I rolled up some characters for Space Princess to test things out a bit. Thus were born these guys ... 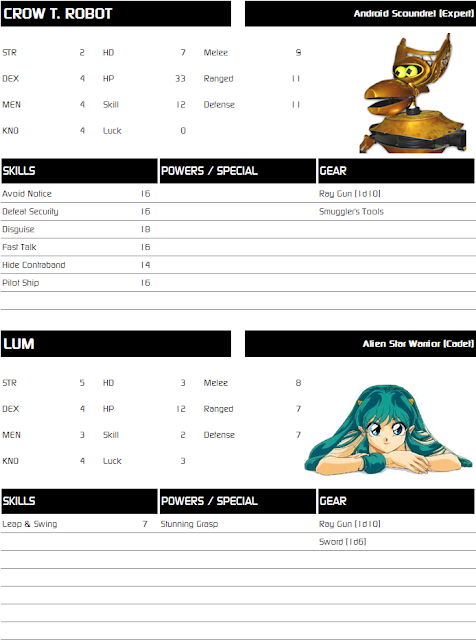 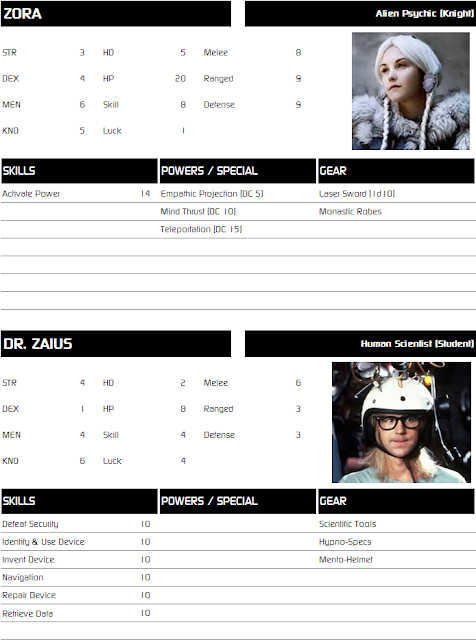 It was late, so there was no time to actually delve into space fortress and rescue a princess, but we did play out a couple of the "escape in a spaceship" scenarios.
Both went pretty well. In both cases, Crow was flying the Satellite of Love, a blockade runner. Lum was manning the light lasers and Zora the heavy lasers (and she was a crack shot), while Dr. Zaius was working the navigation computer - very slowly, I might add.

In the second scenario, the SOL went up against a dreadnaught. This one was a bit more exciting. Initially, the SOL had no trouble out-maneuvering the dreadnaught. Crow is an expert pilot and the blockade runner is a quicker ship. Zora even scored some early successes with her heavy lasers. But as time went on, the firepower of the dreadnaught began to tell. The SOL's armor was degraded, then its weapons systems were taken out, the nav computer damaged (which prolonged making the jump to light speed). Finally, the artificial gravity was knocked out. It looked like Zaius had one shot left at making that jump into light speed and ... he did. Just barely.

The kid was charged up over the battle, and even though the mechanics were very simple (pilot check, fire weapons, navigation check), the slow erosion of the blockade runner's systems and the seemingly inevitable defeat made the process enjoyable. Mind you - one more round, and it's very likely the SOL was, well, SOL.

Over the holiday I'm going to run the first official play tests of a space fortress, and I'll post those results next week.
Posted by John Matthew Stater at 3:02 PM