For the sample nobles today, we go into the elven wood.


Anwenod the Rebel Earl of Arddus
Anwenod is a raven-haired elf earl who dwells on the fringe of the kingdom and near the border marches of the humans. Grey of eye and lean of build, he is a masterful swordsman with a deep interest in the politics of both elves and men. He is currently attempting to woo the daughter of a human baron as a hedge against perceived enemies in the royal court. Anwenod’s retinue consists of his champion, Keryd (elf ftr 3/m-u 2), four elf warriors, two elf sergeants and Cedric, son of the human Baron Donal, who is a visiting dignitary attempting to secure the marriage of his sister Yulisa to the Rebel Earl.

Kaith the Quick, Duchess of Beor
Kaith is a tall elf woman (5’9”, very tall for an elf) with ebony skin and a sharp jaw line. Her hair is short, curly and as black as pitch and her eyes emerald green and radiant. Kaith is a cynical woman, bored with the tedium of life inside the great elfwood. The high queen is her cousin and a tepid rival. Kaith’s retinue includes three scribes, three elf warriors, the harpist Lhart (bard 3) and the human rake Lardre, whose devious antics and disruptive presence help relieve the duchess’ melancholy.

Morgannet the Renowned, the Spider, the High Queen of Elves
Morgannet is the high queen of the elfwood, a gentle woman with nut-brown skin, gray-green eyes and golden brown hair that falls down to her ankles. She is fine-boned, but with flashing, lively eyes and a vivacious, cherubic face. Despite her childlike appearance, Morgannet is an expert politician. Her spies, the elven thieves (level 3 and 4) Blathet and Dumnann are frequent visitors to every court in the land, and little escapes their notice. Her retinue includes three maids-in-waiting (lesser nobles), seven scribes (for the elves believe that every utterance of their queen is prophetic and must be recorded), four elf longbowmen and their sergeant, Pathogius, a human found as a waif and reared by the elves. 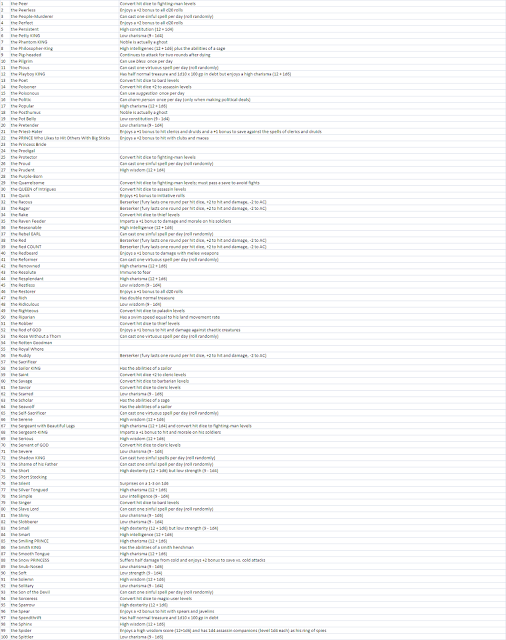 Illustration by Arthur Rackham. Found HERE.
Posted by John Matthew Stater at 10:49 AM