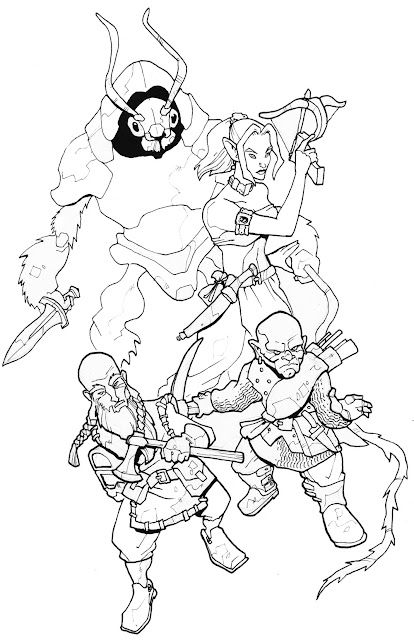 I'm not only working on the second half of the "outer hells" hex crawl for NOD 12, I'm also working on part two of the "Deep Denizens" article. The first part had rules for four humanoid races as PC races - orcs, hobgoblins, bugbears and kobolds. The second part features the drow, duergar, svirfneblin (okay, they're not dark) and the notac-ichat, an insectoid race I made up for the hex crawl. Here is the depiction of these folk by the great Jon Kaufman (pachycrocuta at DeviantArt).

The first article linked those races with the seven deadly sins - gluttony for orcs, envy for kobolds, wrath for hobgoblins and sloth for bugbears. The three evil races in the next article are also linked - the drow are lustful, the duergar greedy and the notac-ichat prideful. Anyhow - enjoy the art preview - back tomorrow with my first entry in a new series called Mega-Monsters - an attempt to convert some of the epic level monsters in the SRD for Swords and Wizardry, adding an idea at a campaign you could build around that monster.
Posted by John Matthew Stater at 10:37 PM