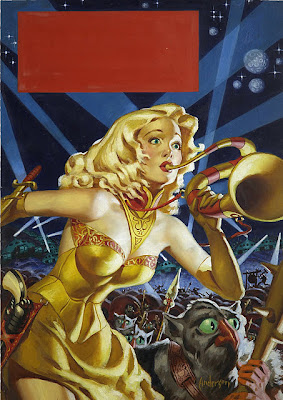 Finally got to sit down with the Daughter of Nod last night and play some Space Princess. You met the core of her crew a few days ago. We added a couple more for this run-through - a veteran gynoid star warrior named XJ9 (pronounced "nye-in", for those who never saw the cartoon) and a genius scientist named Egon. It gave me a chance to find the missing parts in the game and tinker with the mechanics. It also was pretty fun. Here's a brief re-cap:

The gas mines are located on a small moon of Regulon-4, which is surrounded by a sort of asteroid belt / ring structure like Saturn. They represent a forward base for the empire of Lord Kang. Recently, one of the space cruisers of Kang overtook the royal yacht of the Princess Miranda and captured her. The dreadnaught took her to the gas mines, where she will be held until Kang can arrive and "convince" her to marry him, thus uniting his empire with the the Space Kingdom of New Avalon. Or something like that.

My daughter's crew has managed to sneak into the gas mines via a forgotten shaft that runs through an exhaust port for the radium furnaces located beneath the main mine structure. A diversion caused by a wing of star fighters allowed their shuttle to land in a nearby crater on the rocky, barren, slightly radioactive moon.

The action kicked off with them sneaking into the exhaust port. This was a room divided by a 10-ft wide chasm through which radioactive green gasses were vented. There was a door and control panel on the other side of the room that looked as though it extended a bridge. Every so often, gasses would be vented. The crew were in space suits, so being in the presence of the radioactivity was not a problem, but being caught in the exhaust would probably kill them. Declining to use Lum's "leap and swing" skill to vault the chasm, and instead sent Egon, with his anti-grav belt, across. Once there, he commandeered the control panel and extended the bridge. The crew waited for a venting of the gasses and then hurried across. Egon opened the door and they made their way into the complex.

A few turns later, they were listening at doors. Behind one there were many voices, so they passed it by. Another was fairly silent, so they opened it to find a sleeping carnelian space dragon and dozens of silvery gas canisters. They closed the door before it awoke and tried the door across the hall, which had the sound of industrial machinery.

This room had a balcony overlooking several machines that were extracting gas from the asteroid and packing it in the cannisters. Two maintenance drones were working here and ignored the group. The balcony had, one either end, two silvery discs implanted in the floor. Declining to look at these (I think she forgot they were there), Egon again used his anti-grav belt to reach the floor 20 feet below. Realizing the others were still trapped up there, and with some prodding by dad, she tried out a disc and found that it was a sort of elevator. When the whole crew got to the floor below, they checked out an exit door. This led into a small, 10x10 metal room with another door. Stepping in, they triggered a freeze gas trap, but all managed to duck back out before they were frozen. Egon went to work on the trap and disabled it, allowing them to enter yet another room.

This room was piled high with the gas canisters, all labeled and organized. As they entered, a computer voice asked them their business. Not knowing what to say, they quickly moved checked out another door, which led to another freeze gas trap. A third door led into a long room occupied by a floating black hole. Egon identified it as a graviton, a dangerous creature, so they retreated. Now, the computer voice was asking for a pass code. Egon managed to find a control panel and got lucky, entering a code and quieting the voice.

Passing through the trapped room, they enter a sort of small break room - coffee dispensers, chairs, tables. [Made me think of this - some language NSFW]. Sitting in here were three bounty hunters, which we nicknamed Space Cowboy, Space Pirate and Evil Space Suit. A fight breaks out, and after young Dr. Zaius is nearly killed (he has to spend a luck point to avoid death), the good guys finally prevail. Unfortunately, they've taken some damage by now. Egon and Dr. Zaius get to work jerry-rigging a medi-kit from spare parts (they take apart a communicator and locator device found on the bounty hunters, and also find another anti-grave belt and three ray guns for the scientists and psychic). While they're working on the medi-kit (takes an hour), a wandering probe-bot enters the room, stunning the scientists with an blue cone of light and nearly killing the psychic by the time they're done. Its spare parts are added to the scientists' collection, the medi-kit is used to do some healing (three uses, only three were then left), and the group gets a move on.

Their next encounter comes as they enter a large arena, setting off alarms. A slasher (essentially a robotic marilith demon) is lifted into the arena and attacks. it is defeated, but when the group tries to leave the way they entered, they find a squad of soldiers coming their way. They quickly close the doors and Egon locks them. As the soldiers blast at the doors, the group opens the other exit. Only one soldier is posted there, and he is quickly dispatched with a hail of ray gun fire. Running down the long corridor, they trip a pit trap. Zaius and Crow T. Robot fall in and have to be rescued using the anti-grav belts. The group moves to the end of the corridor and finds an elevator.

The elevator, once activated, takes them up to the plush quarters of Lord Kang, who is not present yet. Here, they find the bound Princess Miranda and a hideous Star Inquisitor. The inquisitor uses its mental domination and turns Zaius and Lum against the party. Now, XJ9 and Crow engage the Star Inquisitor while Egon tries to subdue Zaius and Zora Lum. Egon makes pretty quick work of his student, but Lum kills Zora. Egon then subdues Lum. In the meantime, the Star Inquisitor has been slowly beating Crow while the two robots, immune to his psychic powers, chip away at him. In the end, the Star Inquisitor is subdued by a final ray gun blast from Egon (probably the party's MVP for the session) and Lum and Zaius are released from his grip.

At this point, we stopped because it was getting late. Getting back out of the fortress while it was on alert would have been daunting, but fun.

Addenda: I used my handy dandy chamber generator to make this adventure on the fly while we played. Initially, there were no gas mines, but when the first four rooms ended up with "Gas" as special, it became a gas mining station. That, ladies and gentleman, is the value of random tables.
Posted by John Matthew Stater at 11:48 AM