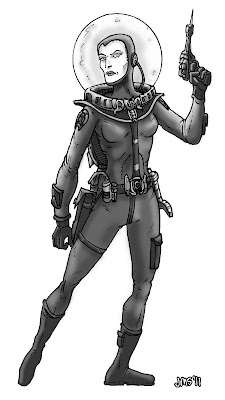 My conception of Space Princess is as a very focused, rules-lite, beer & pretzels game that you and a few friends can break out one day and play without too much prep. For all intents and purposes, it is about dungeon crawls with a pulp sci-fi motif inspired by the original game. I wanted to make a very simple, focused set of rules that worked, and allow others to add on to those rules if they wanted to expand the game into different realms.

With that in mind, and as a way to show the simplicity in the rules, I present the Star Warrior class for the game, along with a sample illustration by Jason Sholtis.

STAR WARRIOR
Star warriors are the rocket-powered heroes of the game, leaping to the fore when things turn ugly. The star warrior is usually a soldier or professional adventurer with marginally more ethics than the scoundrel. They are not as skilled as the scoundrel and scientist and do not have the powers of the psychic, but nobody is more valuable in a fight than a star warrior.

REQUIREMENT: Strength and Dexterity of 4 or higher.

SKILLS: Star warriors may choose one of the following skills as a skill to which they can add their skill bonus during a test: Avoid Notice (Dexterity), Leap & Swing (Strength), Pilot Ship (Mentality) or Swim (Strength).

Hit Dice in this game determine one's attack bonus, much as monster Hit Dice determine attack bonus in other old school games. They also determine hit points and are the basis for one's DEFENSE (i.e. AC).
The ability scores in Space Princess are really just the ability bonuses, which run from 0 to 8. To roll abilities, you still start with 3d6, so we get the bell curve, and then translate those into the ability scores. An ability score of "4" in Space Princess corresponds to an ability score of "9-12" in most old school games. The game uses four abilities - Strength, Dexterity, Mentality and Knowledge.

The skills work off of the skill bonuses in the chart. If your character has a skill (scientists and scoundrels have more skills than the star warrior and psychic) and is attempting a test, they add the skill bonus to the attempt. Otherwise, they add nothing. Tests are also modified by one's ability score.

Example: Athena Laserwolf, a veteran, is attempting to out-pilot some space pirates. She has chosen "Pilot Ship" as her skill, and thus adds her skill bonus (6) to her Mentality score (we'll say it is 5) to get her total Pilot Rating of 11. The space pirate pilot has a total Pilot Rating of 9. Comparing the two ratings, we see that Athena Laserwolf will get a +2 bonus to her roll to keep her distance from the space pirates. She will then roll 1d20, add 2, and try to roll a 10 or higher.

Combat works the same way, except you figure out your combat rating by adding your Hit Dice to either Strength (for melee attacks) or Dexterity (for missile attacks) and compare it to your opponent's Defense (HD + Dex + Armor). Compare the two to determine the bonus or penalty, roll the dice and try to get a "10" or higher to hit.

Starting gear seems pretty light, but consider the source material - old movies. Once a group is in a space fortress prowling around, they can pick up additional gear and find (or build) pieces of super science (i.e. the sci-fi version of magic items). Naturally, the Referee can provide additional bits of equipment if he or she likes.

So, creating a character means rolling four ability scores, picking a species, class and level, rolling hit points, calculating a few basic ratings (so you don't have to do it later) and writing down your starting gear. Theoretically, a group can be ready to delve into a space fortress and rescue a space princess in about 10 minutes.
Posted by John Matthew Stater at 10:50 AM