Finally, we come to the last post in the series on noble nicknames, this time with dwarf nobles. I went all out on this one and gave each three nicknames - hey, maybe dwarves like their nicknames.

Ogmund is a ragged, wild-haired dwarf who dwells in the rugged borderlands on the edge of the dwarf kingdom, lands invaded regularly by the goblin races, ettins and trolls. A famed giant-slayer, he is a loyal companion of Jarl Vagn, having gone on many adventures into the giant country with his father, Vagr, when they were both young dwarfs with much to prove. Ogmund’s nephew, Skapti, is rarely far from his side save when Ogmund’s berserkergang comes upon him. His retinue also includes three chroniclers, two dwarf warriors and their sergeant, Odi and Ljot, a 5th level fighter who serves as his champion and bailiff. Ogmund always dresses in a white tunic and white, hooded cloak.

THEGN INGIRID the Treacherous, the Usurper, the Well-Served

Ingirid is the half-sister of Jarl Vagn and his most hated rival. Hated by most of her kin due to her treachery and her dealing with the goblins and orcs, she nevertheless holds fortitided iron mines in the southern mountains that keep her wealthy and influential. Her consort is Vandrad, an exile from the Jarl’s court, two scribes and one orc sergeant, Forox. Her minions are very loyal.

JARL VAGN the Springer, Star of the North, the Tail

Jarl Vagn is the young, dashing king of the dwarfs, having taken the throne when his father Vagr finally passed into the halls of his ancestor. Vagn is a lover of gold and luxury, unlike his more stern father, but his glib tongue, handsome features and strong sense of justice have kept him popular with all but his half-sister Ingirid. Vagn is accompanied by the berserker Bersi, the shieldmaiden Hlif (who drives him mad with desire), four clarks (one a 3rd level fighter/thief in service to Ingirid), five dwarf warriors and their sergeant, Olaf the Round. 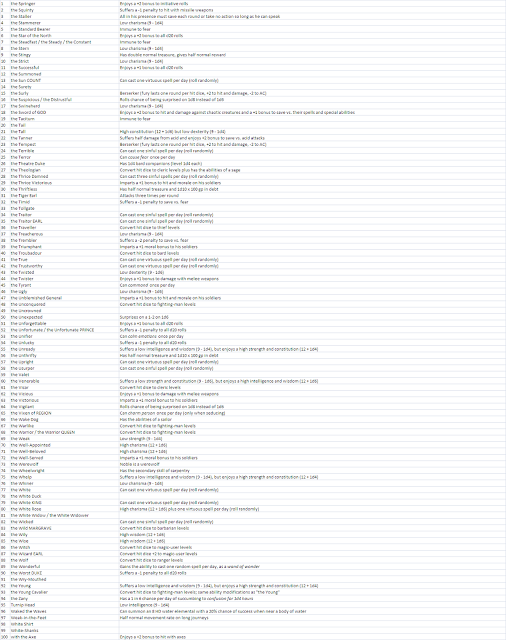 Posted by John Matthew Stater at 10:42 AM