Here's a quick introduction to the Apocalypse 1898 setting ... 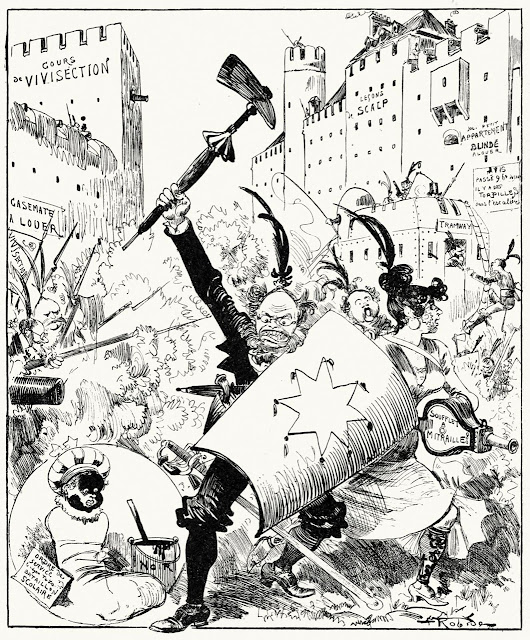 It has been almost a decade since the civilizations of man were laid low by the invaders, and man’s dominion over much of the Earth was brought to a close. The invaders came not like a natural disaster, blind and deaf, to the planet, but with a cold, calculating intelligence. They knew what to destroy and how to destroy it. They knew how to win, and they did win.

But victory does not mean survival. Though they cast mankind’s progress back 500 years, the invaders did not survive to enjoy their victory. Now, the remnants of human civilization struggles to reclaim its former glory. This is no easy task though. Mankind's factories were largely destroyed and their rail systems uprooted. Canals, rivers and seashores are clogged with the red weed of the invaders, making travel by boat exceedingly difficult and slow.

The 10 or 20 percent of humanity that survived the apocalypse from Mars operate with Medieval technology amid the ruins of a much more advanced civilization, one of steam, gas light and telegraph. Many people dwell in small, fortified villages, trembling in the night at the sound of the wolves at their door. A surprising number of people, however, still eke out an existence in the urban ruins.

In New York, once one of the world’s mightiest cities, the boroughs are now ruled as baronies by ruthless political machines and criminal gangs that hold power with fear and violence (well, maybe things haven't changed much after all). In the rubble clogged streets and amid the crumbling edifices of the Gilded Age, men and women struggle for daily survival while plunging into subterranean vaults in search of their own lost marvels and technological wonders left behind by the invaders. With these tools, brave men and women can forge a new civilization on the ruins of the old.

Apocalypse 1898 attempts to combine two popular adventure tropes: the Victorian era and its wondrous scientific romances and the concept of the post-apocalyptic world, where man has lost his tools and must live again as an animal. The notion of a Victorian apocalypse is not new, the genre having been invented by the Victorians themselves. Apocalypse 1898 focuses in particular on the ruins of New York that were left behind after the infamous invasion by Mars written about in H.G. Wells’ War of the Worlds.

Apocalypse 1898 is a role playing game, in which a band of players take on the rolls of people attempting to survive and thrive in the post-apocalyptic New York of 1898. One player is the Referee, and he or she runs the adventures and adjudicates the rules when necessary. The game is primarily played with pencils, paper and a complete set of dice, including the traditional six-sided dice most often found in games as well as dice with four, eight, ten, twelve and twenty sides. A healthy dose of imagination is also required to bring the setting and the struggles of the characters to life.

This book explains the rules of play and describes the setting of New York in more detail. It also offers advice for the Referee in terms of running the game and writing adventures for the players.

After you have read the rules, gather your players, elect your Referee, grab some paper, pencils and dice and begin your exploration of Apocalypse 1898!

Image from OBI Scrapbook Blog - by Albert Robida, illustrating a European family going downtown to dine in a series of caricatures about war in the 20th century.
Posted by John Matthew Stater at 12:03 PM