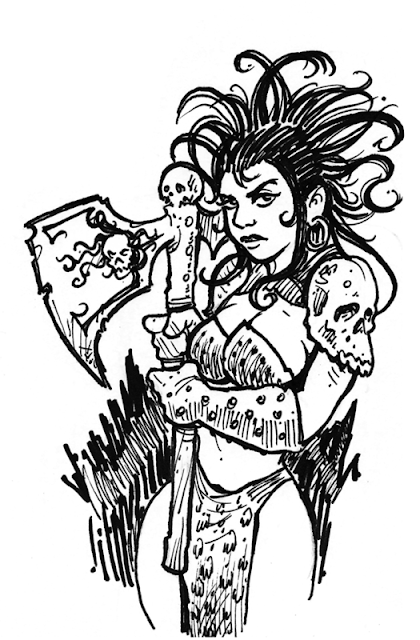 The defense coach moves first. All of the players begin the game in the “tunnel” leading to the playfield, and thus each one must be moved from their goal cave. The light colored square counts as the first square of their movement.

Play proceeds in turns. The defense coach makes the first move, then his opponent, and so on.

On a coach’s turn, he may move all of his players.

The following actions can be attempted in Cave Brawl:

Pass: A pass is an attempt to throw a ball from a passer to a receiver. Compare the passer’s PK score to a difficulty class (DC) based on the range of the attempted pass. For each opposing player adjacent to passer, the d20 roll suffers a -1 penalty.

Catch: This is the attempt by a player to catch a ball that has been passed to them. Compare the receiver’s CD score to the same DC as for the original pass. For each adjacent opposing player, the d20 roll suffers a -1 penalty. If successful, the receiver now holds the ball and can move their allotment of squares. If the catch is failed, the ball is placed one square away from the receiver by the opposing coach.

Kick: Kicking works as passing. The ball is aimed at the tiny hole above the goal tunnel of the opposing team. A successful kick instantly ends the game in victory for the kicking team. The DC of the kick is determined by range, measuring from the kicker to the goal square. For each opposing player adjacent to kicker, the d20 roll suffers a -1 penalty.

If the kick is a failure, the ball is placed 1d6 squares away from the goal square by the opposing coach.

Pick Up Ball: A ball that is loose on the ground can be picked up by a player. The player must move to the square containing the ball and pick it up. That player’s movement ends in that square.

Scoring
A team that scores a goal by kicking wins the game automatically.

By moving the ball into the opponent’s goal square, a team scores one point. The first team to score an agreed upon number of points (3 can be considered the default) wins the game.

When a point has been scored, the ball is given to the opposing team and play begins again with each team in their goal tunnel. As always, play begins with the defender.

Keep It Moving
Ungawa demands action! If the offense (i.e. the team with the ball) has not moved the ball for two turns, Ungawa’s priests release one of the following terrors from their animal pits. Roll 1d6 to determine the beast:

The released animal either emerges from the left cave or right cave (flip a coin). It heads towards the nearest player on the team that has failed to advance and attacks. After that, the animal moves toward and attempts to attack (if it moves far enough) the nearest player from either team. The animal does not leave the field of play until a point is scored or the animal is killed.

To attack, compare the beast’s Power value to the defender’s BT or CD (whichever is higher) and roll 1d20 as normal. The type of beast determines the number of hit points the player loses on a successful attack. The beast rolls a number of 1d6 equal to its Power value to determine its hit points.

Attempts to block or tackle a beast are made by comparing the attacker’s BT to the beast’s Power value.

League Play
League play can be accomplished by forming a number of teams and then having each team play each other team, recording wins and losses, during the season and allowing the two teams with the best win-loss records play a championship at the end of the season.

Alternatively, you can put the teams in brackets, allowing them to play an initial round of games, the winners playing each other in successive rounds until only two teams remain.

Players that do not survive a game are replaced by new players for the next game. Each player that survives a game can improve one of their ability scores (BT, CD or PK) by +1. No ability score can be improved higher than a score of “8”.
Posted by John Matthew Stater at 6:34 PM