Give the Hollywood Lawyers What They Want ...

Instead, you can give all that free publicity to me! 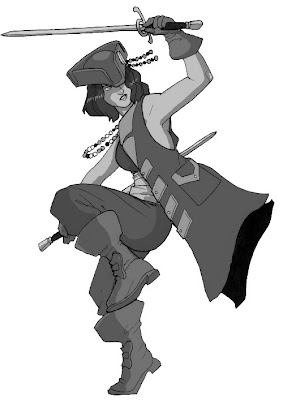 Come on - NOD, Pars Fortuna, Mystery Men!, Mutant Truckers, 1800-American Empires, Blood and Treasure, Space Princess, Cave Brawl, Greatsword, Action X, Queen and Kaiser ... I have tons of content, and I won't shut down your blog if you use any of the original art from it that I've posted - so long as you credit the artist and give me a link back.

And it doesn't have to be me or my nonsense. I'm sure other small creators of games, independent movie and entertainment producers and craftspeople like the folks at Etsy would like the free publicity as well. Instead of buying yet another t-shirt with Batman on it, buy somebody's groovy creation at Cafe Press. Instead of watching the latest Hollywood big budget sci-fi or fantasy film ... well, actually, you probably just shouldn't watch that crap period.

Allow SOPA/PIPA to bite Hollywood and the whole Entertainment Industrial Complex so deservedly in the ass and stop talking about them and their content. If they want to take their ball and go home, let them. We can have plenty of fun without them!

Illustration by Jon Kaufman, from the upcoming release of Blood and Treasure
Posted by John Matthew Stater at 8:28 AM