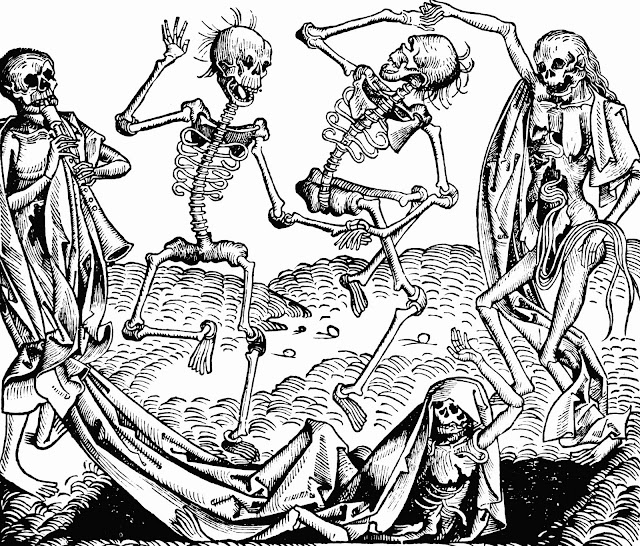 20.59 Death Temple: A low, round hill rising from the muck here is covered by giant mushrooms. The mush-rooms grow around and through dozens of humanoid corpses, rotting timbers and rubble. Rising above these mushrooms there is an ancient temple of cracked and stained stone dedicated to Death itself.

The temple consists of an antechamber filled with murky water to a depth of three feet. This water is home to a sewage water weird. Beyond the fetid pool there are tarnished bronze doors decorated with hundreds of tiny skulls that appear to have been embedded in the door and then covered with a layer of bronze. Opening these doors without removing a trap causes the floor under the pool to collapse, sending the water and the characters into a deep pit that connects to the secret sanctum of Death below.

Beyond the doors lies the inner sanctum, where stands the great bronze idol of Death, covered in verdigris, eyes downcast, hands gripping a scythe. The idol is surrounded by several large hepatizon bowls holding rotting fruit and tarnished copper and silver coins (about 300 cp and 100 sp) and twenty grimy jars filled with greenish liquid (50% chance of a strong liquor, 50% chance of acid). A secret door in the inner sanctum leads to stairs that descend 50 feet into the earth, to a subterranean abbey.

The abbey is home to twelve priestesses (Clr3) and their mother superior, Mergsta (Clr10; 31 hp; potion of healing). All of them women have had the skin flayed from their backs (each carries a bloody scourge), and wears nothing but a long, black loincloth and a string of pearls wound into their hair (worth 50 gp each for the priestesses, 300 gp for Mergsta). Besides their scourge, they are armed with heavy maces. Their abbey consists of several living chambers, a pantry of unpalatable, rotting food, a large dining chamber decorated with soiled tapestries and bunches of sickly purple mushrooms growing from the walls and a secret sanctum.

The secret sanctum holds a smaller idol of Death carved from black marble and garbed in the same manner as the priestesses. The back of this idol is hollow and contains the Codex of Saint Death, which permits anti-clerics who read it daily to cast one additional evil or reversed spell of each level open to them per day, and a single large ruby worth 15,000 gp. Mother Superior Mergsta reads from the codex daily.

Those who touch the idol without first supplicating themselves to it have their backs break out in painful welts that soon burst open (per a cause serious wounds spell). Removing the ruby from the secret sanctum causes a swarm of biting flies (i.e. insect plague) to be summoned to defend the idol.

21.56 Diggers: Ten skeletal trolls scrape at the sides of a rocky hill with little progress. Inside the hill, behind a cave-in, there is an evil +3 longsword called Himon. Himon has a reddish blade and the pommel is set with a cluster of tiny rubies. The sword sheds darkness in a 10-ft. radius but allows the wielder to see through it. The sword can also animate up to 20 HD of creatures it has killed – the troll skeletons are its servants, and they are attempting to unbury it. Its former owner, the reaver Vigon, lies dead underneath all of the rocks. He entered the cave to avoid a pack of demon dogs.

22.62 Pitted Statue: The remains of a giant iron statue – humanoid, but unrecognizable – stands here, overlooking a vast miasma of waste in which float hundreds of wicker baskets containing wailing infants (glamered madragoras). A tribe of winged kobolds flit around the statue, gnawing at the metal (for metal is their only source of nutrition). The kobolds prefer precious metals, and can devour up to one pound of the stuff before they are sated. For every pound of precious metal brought into the hex, there is a 5% chance of an encounter with 3d6 of the kobolds.
Posted by John Matthew Stater at 3:48 PM