Here's that uber-short story I wrote for a Lulu contest. It is set in the land Beyond the Black Water - which I wrote for Frog God Games. I might expand on this and make a full fledged short story of it - maybe launch a series - and then Hollywood will buy it - and make a super successful film - and I'll use the money to buy D&D from WOTC - - - or maybe not.

I Was Nobody
John M. Stater 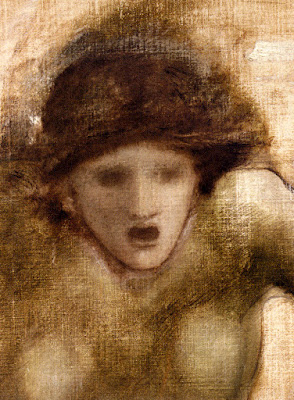 The water in the ears was the worst of it. Well, no – not really. But it was persistent and annoying. There was also the cold. Eyes staring up at black clouds. Arms and legs unable to move, throat unable to groan. Death but not death.

After minutes or days his fingers began to paw the wet sand and sometimes feel the air brush cold against his damp flesh. His eyes could blink again, his lungs breath. Awareness now coupled with mobility. Life but not life.

It was nothing short of joy when he sat up and raised his head from the rippling waters, the surge and suck. Nothing short of a triumph when he crawled up the beach to the gray-green grass on the hills. Ecstasy to see the land beyond – the pseudo-green, rolling hills. But there was no Sun here and the sky was gray, the water black save for the white shapes moving in it, sliding through it with those pearly horns breaking the surface.

His legs and arms did not hurt, but moved as though they did. Stiff and noncommittal, dazed and lethargic. He soon left the beach behind for the quiet of the hills, that great, pointless expanse. The sky was still gray. That bothered him. One foot followed the other over the hills until they limbered up and he began to run. He wanted to make his lungs burn, but they did not. He wanted to make his feet hurt and his thighs ache, but they did not. It was too quiet, so he screamed.

His eyes were attracted by a gleam on another hill, so there he went. He saw a body encased in a byrnie of steel scales and pierced by a short blade. He shuddered and this made him smile. Why a coat of armor? Why a blade? Someone died here. Something killed him. Did somebody want to kill him? He looked across the gray-green hills and licked his lips. With a bit of work he dislodged the blade, rusty and pitted, from the armor. He shook the brittle bones from the armor and put it over his own shoulders to cover his nakedness. The armor was heavy and uncomfortable, too large, no underclothing. He crawled back out of the armor and cast it aside and moved on.

The excitement of death – true death – passed eventually. He continued to wander and smiled when his head began to throb, but quickly realized it was not his head that throbbed, but the ground. Horse hoofs beating the ground. No dust filtered into the air on the horizon – were they far or near?

They were very near, upon him in fact. Men with faces like hyenas on strong horses that sucked in the still air and belched it back out as clouds of steam. Horsemen with spears leading a train of men and women in chains, not crying, shuffling, lost in thought. The men stopped and regarded him, standing there naked but for his sword. Other men joined them, a few yards separating them.

“Who are you?” they growled.

The word caught in his throat. Not yet – he didn’t want to say it yet.

“I …”, the word played on his lips, which trembled.

“Nobody,” was what he wanted to say and think. He was nobody. Nobody. Or was he nobody? It would be easier, being lost. His eyes met the eyes of the people in chains.

“Wroth,” he finally said. He was Wroth.

And the sword leapt out at the men with the spears.