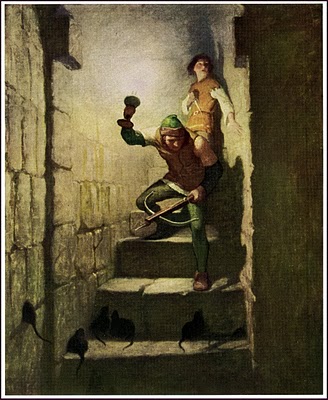 You know how hard it is to think up a name for a fantasy game that hasn't already been taken?

Here's an idea that popped into my head today. I love the old school games and write for them and will continue to write for them until the cows come home. I am pro-retro in all of its glorious forms, from Castles and Crusades to Basic Fantasy RPG to Labyrinth Lord to Swords and Wizardry and beyond.

But ... I don't hate the modern game introduced in the SRD (System Reference Document). I stopped playing it because there were too damned many rules and modifiers to keep straight - I wanted simplicity - but why can't I have elf druids and dwarf magic-users and what about gnomes and half-orcs and prismatic sprays and you know, those conditions rules were pretty handy and the three saving throw categories weren't bad, just different.

Today, I'm driving around town and think - maybe it would be fun to just write a rules-lite version of the SRD that has everything in it - nothing (much) removed because it wasn't there 20 or 30 years ago or because I don't personally get much mileage from it. Feats could still be there, but optional (remember my Boons article from NOD 1?) for those who hate feats. I can do skills like I did in Pars Fortuna - as saving throws, with a blanket modifier of maybe -5 for difficult tasks and -10 for super difficult tasks - no skill points and all that guff, and anyone without the skill succeeds on a flat 1 in 6. The diplomacy and intimidate stuff can be optional for people who prefer to leave that up to the players' skill rather than dice rolls. About the only thing I can imagine leaving out is some of the alignment specific spells (i.e. keep it simple with Law/Good vs. Chaos/Evil instead of nine alignments). Prestige classes - why not? You can jump in at 6th level from certain classes, because dwarven defenders are cool. Yeah - we walk back the power level, because the game was overpowered and tended to make super heroes rather than adventurers. Basically, I don't want to be the GOD OF THE RULES who issues commandments from on high or gives you his version of the perfect, just the dude who put the rules together in a readable form and sold it to you.

I guess the real theme for Blood & Treasure is lots of options + super simple rules that you can mostly carry around in your head.

No, I don't know when. But eventually.

What do you think?