As mentioned in the last post, Cave Brawl is played by two teams of nine players each (yeah - you can do 7 or 11 or whatever - don't sweat it). There are five different factions (well, four really) that compete in the games. Coaches pick a faction and choose their player types and then roll stats for those individual players. Each team has to have at least five players of the "basic" type - i.e. an Amazon team has to have at least five amazons, the other four positions can be "special" players.

Each of the four main factions (I know I said five before - just keeping reading, you'll see what I mean) has three player types each. Each player has five statistics to keep track of:

Block and Tackle (BT): This measures the player's overall strength and ability to shove others around.

Pass and Kick (PK): This measures the player's ability to put the ball where they want.

Move (MV): This is the number of squares the player can move each round.

Hit Points (HP): This is the amount of injury a player can take before they are removed from play. A player has 1d6 hit points for every point of "Block & Tackle" they have.

For each player, roll 1d6 to determine their BT, CD and PK scores, modifying the roll for the player type (see tables below). Once the BT is determined, roll for HP. A player's MV score is determined by their player type. 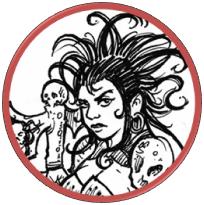 AMAZONS
The amazons are fierce woman warriors from the dinosaur-infested jungles. They are quick, agile and bloodthirsty. 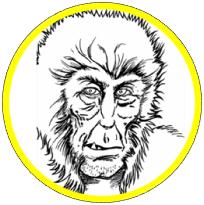 CAVEMEN
The cavemen and their ape allies dwell in the hills. Frankly, they mostly show up in hopes of tackling some amazons.


Special: For an opposing player to attempt to BLOCK or TACKLE a cave ape, they must first test their courage by roll 1d6. On a roll of "1", they quake in fear and lose their turn. 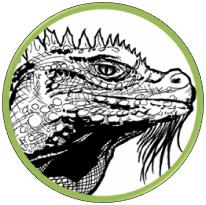 REPTILIANS
The cold-blooded reptilians venture up from their super heated vents beneath the ground to show their dominance over the pathetic mammals.


Special: Troglodytes are surrounded by a terrible stench. Any opposing player beginning their turn adjacent to a troglodyte must roll 1d6. On the roll of a "1" they are too busy retching to take a turn. 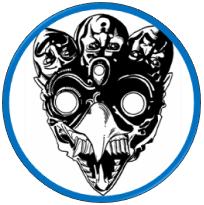 WITCHDOCTORS
The witch doctors and their sorcerous spawn are not about to let a bunch of mundane warriors be Ungawa's favorites. It's a matter of witchdoctor pride!


Special: Zombies, when "killed" are not removed from play. Each round after death, the controlling coach can roll 1d6 for each dead zombie. On a roll of "1", the zombie re-awakens with 1d6 hit points.

Witchdoctors can cast one curse during the course of the game. This curse knocks 1d6 points from a designated target's BT, CD or PK score (witchdoctor's choice).

THE EXILES
The final "faction" are the exiles - members of other factions who have been cast out for breaking one taboo or another. A team of exiles can choose its members from any of the other four factions, but must still have 5 basic players and only 4 special players.

Unfortunately, exiles don't become exiles because they work and play well with others. Any time a member of one faction is adjacent to the member of another faction on his same team, and not adjacent to an opposing team member, he or she must roll 1d6. On a "1", the player attacks the old rival with a TACKLE and otherwise loses his or her turn.

SAMPLE TEAM OF EXILES
So, why not throw together a sample team of exiles to test things out. My 9 player team looks as follows:

Looks like Una is going to be my default passer, but she's going to have to be protected - Jim McMahon could take a hit better than her. Urg is a little disappointing as a cave ape, but on the whole it looks like I have some pretty stout bruisers on my team - they may be able to outlast their opponents if they can't outplay them.

Image of amazon from PARS FORTUNA, drawn by Mike Stewart.