When I dove into the Blood and Treasure project, I had two goals in mind. First and foremost, make it as rules light as possible so that the game is compatible with old school games - that also means reining in some of the power creep that was present in the 3rd edition. Second - use as much of the material in the SRD as humanly possible. Now, sometimes the first goal precludes the second. Some spells - primarily the "mass" spells were, in my opinion, part of the power creep issue. If such a spell wasn't in an older version of the rules, it didn't make it into Blood and Treasure. Other spells and feats played off of rules or minutia that I ejected, so they didn't quite make it in. In all, I retained 95% of the spells, all of the monsters and probably 95% of the magic items.

One thing that didn't make it in, however, were prestige classes. Initially, I wanted to find a way to use them. The concept isn't as new school as some folks might thing. The paladin was originally open only to mid-level fighters of lawful alignment - i.e. a prestige class, and the bard that made it into AD-n-D was largely the same. The problem, though, was one of special abilities. So many of the special abilities of the prestige classes just no longer worked in the rules lite environment, and of course many of the prestige classes in the SRD were just patches to get around the fact that multi-classing in the d20 rules did not work properly for spellcasters.

Still, I'm a scavenger at heart, so I was determined to get something out of those prestige classes. The assassin was already slated to become a full class in Blood and Treasure, and looking at the other classes, I saw another that I thought had the makings of full class-hood - the Duelist. Truth be told, I've long been a fan of the duelist concept, starting from the first time I watched Cyrano de Bergerac in a freshman English class. So, without further ado, I present the Duelist in "rough draft" form - some changes may occur before it's official.

DUELIST
Duelists are warriors who learn to fight using trickery, fancy swordplay and quick reflexes rather than armor and shields. Duelists may be swashbuckling rogues or serious and studious masters of fence.

Requirements: Duelists must have dexterity and intelligence scores of 13 or higher.

CLASS FEATURES
A duelist adds her intelligence bonus (if any) as well as her dexterity bonus to her Armor Class while wielding a melee weapon.

Duelists can make special attacks with a +2 bonus to their attack roll.

When fighting defensively, a duelist enjoys a +4 bonus to Armor Class instead of the normal +2 bonus.


At 4th level (romantic), a duelist gains a +2 bonus on initiative rolls.


At 9th level (duelist), a duelist can choose to establish a stronghold in the wilderness and gain followers (see High Level Play below). A duelist who becomes a lord or lady attracts 1d6 men-at-arms per level, 1d6 first level duelists who wish to train under them and one 3rd level duelist to serve as a lieutenant. These duelists should be generated as characters under control of the player.

At 10th level (duelist), a duelist gains the ability to strike precisely with a one-handed piercing weapon, such as a rapier or dagger, doing double damage on a successful hit. The precise strike can only be attempted in the round after the duelist's opponent has missed with one of their own attacks. When making a precise strike, a duelist cannot attack with a weapon in his other hand or use a shield. A duelist’s precise strike only works against living creatures with discernible anatomies. At 20th level, the extra damage on a precise strike increases to triple.

At 14th level (duelist), if a duelist chooses to fight defensively, one successful attack against him each round must be re-rolled.

At 18th level (duelist), a duelist using a one-handed piercing weapon may deflect one successful ranged attack per round. 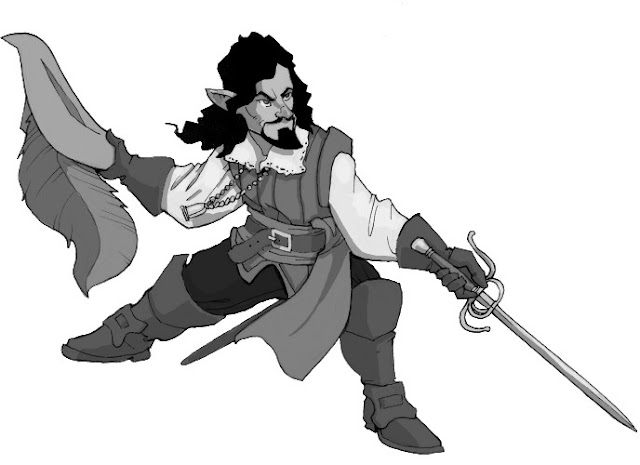 Illustration of a gnome duelist by Jon Kaufman.
Posted by John Matthew Stater at 5:00 PM