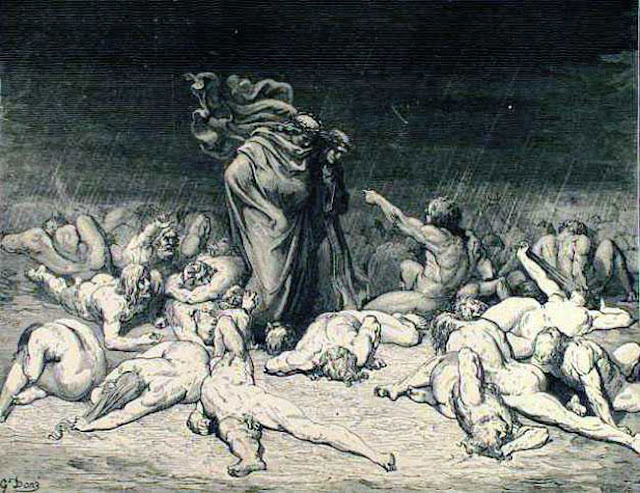 The wind and rain swept circle of Erebus gradually gives way to Abaddon. Unlike the mile high clffs that separate Asphodel and Erebus, the border between Erebus and Abaddon is a more gradual, though slippery, slope.

In Abaddon, the constant rain of Erebus becomes slowly falling flakes of snow. This snow, unfortunately, is not pristine and white, but rather raw sewage in snow form. These putrid flakes fall from the sky and collect between great hills in the form of slush. The slush is rarely more than a foot or two deep, though sometimes it hides deeper pits that are home to otyughs. In places, these slowly moving rivers of sludge are clogged by bulrushes.

Mulling through this sludge are the damned souls of Abaddon. No longer shades, they have been transformed into great, bloated humanoids with faces suggesting swine. These swine-things roam through the muck, rooting in it for bits of more solid waste, which they devour as though it were truffles or some other fabulous viand. The swine-things are slow moving and pay little attention to folk unless they catch the scent of food or drink. They mostly serve as prey for the devil dogs that roam Abaddon.

The hills of Abaddon are not much better. They are slick and slimy in some places and covered with growths of stinkweed, stinking wattle, black horehound, poison hemlock, thorn-apples, devil’s dung, stink grass, skunk cabbage, wild mandrake, chokecherry and poisonous sumac. Amidst the mud and the plants there are great heaps of broken crockery and glass and rusted tools and weapons – all irreparable and long forgotten. Most of these hills are inhabited by the Abaddonites.

Miasma of Entropy
Abaddon is not just disgusting, it is catching. A miasma of entropy covers this circle, affecting everything unfortunate enough to have entered it.

Each living being traveling in Abaddon must pass a saving throw each day or succumb to a disease (see below). This save must be made each day, with a new disease being added to the victim’s repertoire each time they fail.

Characters that dawdle too long in Abaddon may soon be naked, weaponless and wracked with disease.

Races of Abaddon
Abaddon, like most of the other circles of Hell, is not only inhabited by pitchfork-carrying devils and their victims. Three races known to people of the surface world dwell in Abaddon, though these races have been changed in many ways by their habitation in Hell.

Goblins: The goblins of Abaddon are scurrilous little squabs with fat, red faces and gleaming white eyes. They are junk collectors who carry large packs filled with all manner of useful and useless items. Any tool they have that is in working order is bound to carry some manner of curse. Abaddonite goblins have acidic saliva and, once per day, can summon and command 1d12 giant rats.

Orcs: Orcs, being creatures of gluttony, are eminently suitable for Abaddon. The orcs of Abaddon have piggy faces and grotesque, bloated bodies. Their skin is pale and blotchy and their eyes are pink. Abaddonite orcs are immune to disease and poison and have the paralyzing touch of ghouls (save at +3 to negate). When they paralyze or fell a foe, they usually fall to devouring them.

Troglodytes: Like the troglodytes of Nod, the troglodytes of Hell dwell underground, burrowing into the muddy hills and the bedrock beneath them. They have bilious green scales and fan-like crests that run from head to tail. The odor of the troglodytes of Abaddon is so foul that those within 10 feet of them not only suffer the normal penalty but also fall to vomiting until they pass an additional save, which they may attempt once per round.

Lords of Abaddon
Abaddon is ruled by Beelzebuth, who takes the form of a great fly. He sits at the center of all the intrigues of Abaddon and many of the intrigues of Hell as Lucifer’s chief rival and most bitter enemy. Under his dominion are the lords Demoriel and Behemoth (who is usually away from his domain in Abaddon serving as butler in the palace of Lucifer in Dis). The primal demon lord Jubilex also dwells on Abaddon, though he pays no tribute to Beelzebuth. The terrible three-headed hound Cerberus also roams Abaddon.
Posted by John Matthew Stater at 9:05 PM