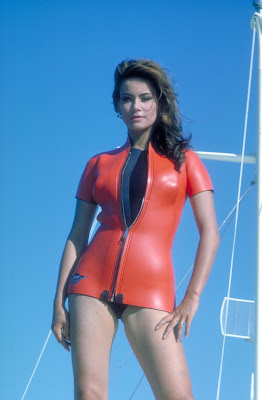 When Department Zero, a super-secret arm of the Secret Service, needed well-traveled agents that could act as couriers throughout the world, they naturally turned to fashion models. When those models became too old to compete at the highest level of the modelling world (like, 26 or so), Department Zero took their three most promising agents and trained them to become world class operatives codenamed the Danger Dolls. Through rigorous combat and espionage training and highly classified atomic spa treatments, Department Zero created the three most dangerous women on earth:

Delilah Delacroix, former pin-up queen and native of New Orleans. Delilah is trained in several martial arts and has proven to be a natural acrobat. Delilah is a hell raiser with a thirst for new experiences.

Debbie Dalton, former all-American swimsuit model and native of Los Angeles. Debbie has become a master of disguise and an expert marks-woman. Debbie has a laid back attitude about everything but her job.

Desiree Drake, former high fashion model and native of New York City. Desiree is an expert in electronics and explosives. Desiree is the epitome of grace and breeding, and an incredible snob.

What the Danger Dolls do not know, is that Department Zero is not what they think it is. Rather than being a super secret arm of the U.S. Secret Service, it is in fact an arm of SMASH. While their missions are usually "good", they often contain the seeds of evil. There are some in the organization that believe Desiree has caught on to this and they fear what she might do next.