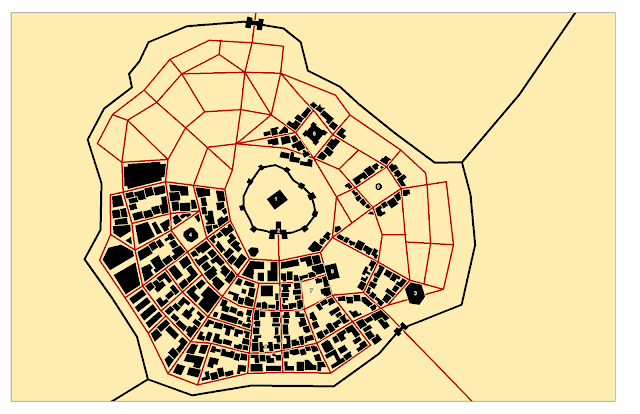 The map is still in the rough stages. Here are a couple more locales to go with it.

As with all the priests of Yun-Bai-Du, the sohei of the Splendiferous Tiger King are women. Called the Tiger’s Daughters, they wear red robes embroidered with golden tigers on the sleeves over their armor and are known for the black paint they use to decorate their faces in the manner of a tigress. The Tiger’s Daughters wield long-handled iron claws (deal 1d6 damage) and tachi. Atop their walls they wield repeating crossbows and baskets of stones and iron balls that they can pour down on their enemies. Their fortress is connected to the fortresses of the sohei of Darting Sparrow King Mountain and Crashing Thunder Emperor Mountain (with whom they share a profound enmity). These long walls are 40 feet tall and every 50 feet have a 60 foot tower marble studded with small iron spikes, many of which are electrified. These walls and towers are manned by the royal guard of the White Sage King (which includes many low level shugenja) and the elite archers of the Chiwa Brotherhood.

The inner gatehouse is connected to the nunnery of the Tiger’s Daughers. Since the sohei (as with all the gatehouse sohei of Yun-Bai-Du) keep 25% of the tolls collected at their gatehouses, their nunnery is quite luxurious, with extensive use of marble and oiled teak and many statues of ivory, gold, brass and marble. Their dining hall is lined with long, low tables of polished oak, with velvet cushions and silver bowls and goblets. The exercise chambers of the sohei are floored with supple bamboo and have padded walls. Most spectacular is the inner sanctum of their temple, where they keep a gold statue of the Splendiferous Tiger King mounted on his war-tiger. The tiger is decorated with orange sapphires and inlaid with black jade, while the King is garbed in rich silks.

The roof of the nunnery is planted with lush grasses. Here, the nuns rear sacred red deer for sacrifices at the altar of the immortal king. The beasts are slain by the abbess Sarighin using bagh nakh to tear out its throat. The blood is collected in a terracotta jar and boiled over a sacred flame. The jar with the dried blood is then filled with wine and drank by all the sohei, while the deer’s carcass is prepared with rice noodles and served to the folk who enter the outer gate and give an offering and prayer to the Splendiferous Tiger King. The antlers are ground into a powder that is sold as a medicine.

5. Temple of Agrodaur: Boldashar is the high priestess of Agrodaur, the implacable, unresponsive god of law and defense. Her temple is a six-story pagoda constructed of cut stone blocks, polished white oak and steel roof tiles traced with silver. The heart pillar is made from blessed granite. This pillar also serves as the idol of Agrodaun. The pagoda is approached via four paths paved with red stone and lined with guardian statues (bronze) of famed soldiers of the empire. Between the paths there are rock gardens tended by halfling slaves taken from the Golden Steppe by the Ulu-Than nomads. Surgeries performed by the priests keep the slaves docile and obedient. The priests of the temple dress in robes of white silk and tall silk hats bearing numerous black tassels.

Beneath the pagoda of Agrodaur (or beneath its rock gardens, to be precise) there is a subterranean ossuary containing the bones of sohei who died in battle. In these halls, the bones are placed on shelves and given every reverence by the priests of the pagoda. The ossuary halls are circular and formed like a labyrinth. At the center of this labyrinth is the exposed heart pillar, here carved in the shape of a coiled dragon and bedecked with jewels worth 17,000 gp. The entire chamber is riddled with razor-sharp, invisible blades. To get to the central pillar and then exit back into the labyrinth, one must know the proper combination of steps and do them precisely. Otherwise, each step taken into the inner sanctum inflicts 1d8 points of damage and forces the person to step back. A person has a 1 in 6 chance of taking a safe step even if they do not know the proper combination.

Once one has reached the dragon sculpture, they might notice that the dragon’s taloned hands are actually manacles and that the altar is stained with blood. Further investigation reveals channels and holes in the floor around the bottom of the idol. One of the dragon’s fangs pivots. If turned right, the fang causes the blades in the room to animate (per the blade barrier spell). Turning it left causes the floor around the idol to turn into a polished chute. The chute delivers people to a secret chamber 40 feet below the temple onto a small island in the middle of a subterranean lake.

This lake is cold and black and sits in a large volcanic cavern 1 mile in radius. The walls of the cavern are riddled with caves that extend another two to three miles into the underworld. The lake and caves are home to all manner of aquatic horrors, from albino electric eels to a rare breed of blind aquatic hobgoblins with translucent skin and long, black horns placed in their foreheads. The island in the middle of the lake is of particular interest. It is formed of basalt and carved by human hands into a platform with a well in the center. Examination by dwarves or engineers will reveal that the blood holes in the inner sanctum above would send that blood dripping into the well. In the bottom of the well there is a pulsating cyst that looks as though it is encrusted with thousands of bloodstones. This cyst contains the slumbering form of the demon Daldis. Daldis hungers for halfling blood and needs approximately three more sacrifices (made at the new moon) before she will awaken on the material plane as the herald of Chaos. In her complete form, she appears as a tall woman with a curvaceous body, glistening black skin, a sharply pointed chin and skeletal hands that end in long talons. She has shining green eyes that can open gates in walls three times per day, allowing up to 10 HD of demons (or a single demon prince) to enter the material plane before the gate collapses. Around her neck she wears a necklace of halfling skulls lacquered with green paint. Boldashar is her high priestess and the sohei of the pagoda are her devout cultists. The birthing well is tended by mogura-jin (mole men) who travel to it from their subterranean lair via boats made from the dried remains of purple worms.
Posted by John Matthew Stater at 9:35 AM