Quick post to give people an idea of how the hex crawls I'm writing for Frog God Games "connect". They were designed to depict different types of terrain so that Referees could stick them into their own campaigns when they need a certain terrain type, but it's tricky to write a hex crawl without injecting some setting - at least for me - and I found the blank slate of the HCC's irresistible. 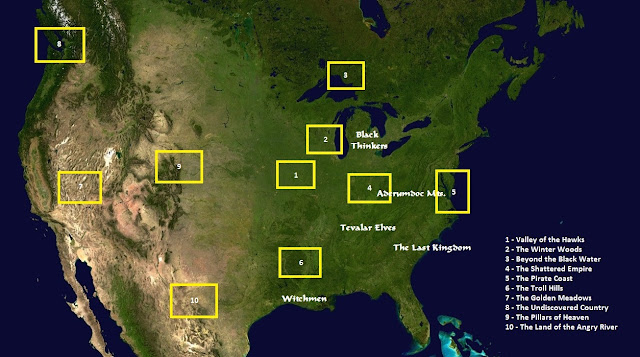 HCC1 is set in the vicinity of Iowa, since the Stater family hails from Iowa and that is where I was when Bill Webb first emailed me about the idea of writing the HCC's. The second is centered around Lake Geneva, WI (do you know how hard it is to come up with a reasonably original play on Gygax's name?). HCC 3 really just got shoehorned into Canada because I wanted it to be north of HCC 2. The Shattered Empire (HCC 4) is centered around Cincinnati, OH, where my new grand nephew lives. You get the idea. I've nicknamed the "campaign world" Namera.

The squares on the map are not quite to scale, but they should give people an idea of where the HCC's take place. There are a few additional notes on the map that might be turned into additional HCC's if the project proves popular.